Check out our past events!

We had so much rain in the days prior to the event we weren’t sure the course would even be open, but the skies cleared and we enjoyed a wonderful evening at Bearspaw Golf Course.

Bill Demaer was our guest speaker.

Bill talked about “Who’s Your Caddie?“; he talked about the caddie’s role and a bit of history.  Caddies aren’t servants … but they serve.  Caddies aren’t owned by the golfer, and they aren’t servants of the golfer either.  Often life-long relationships develop, but they don’t belong to each other.  Our relationship with God is very different – belonging is a foundational part of that relationship!  Bill referenced the Heidelberg catechism (a method of Bible teaching) that talks about who we, as Christ-followers, belong to: Our Savior, Jesus Christ.
Bill recounted a story from the Bible (2 Kings 5) where King Aram’s army commander, Naaman, suffered from leprosy.  God used a young servant girl to encourage Naaman to go to Elisha to be healed!  Her word of faith set in motion events that brought God’s blessing involving an army general, two kings and a prophet.  She spoke out because she knew whom she belonged to.
Bill left us with this challenge:  Do you know who belongs to you and who you belong to?  God belongs to us, and we belong to him if Jesus Christ is our Lord and Savior.  God wants to lead and guide us.  Like a caddie, he wants to help us recover from the shanks, slices and hooks of life to get us back on the fairway!

Thank you Bill for your inspiring words!

Another wonderful meal and good (?) golf.

Wayne Amero was our guest speaker.

Wayne has been in the janitorial business for over 30 years.  He shared that he was doing his best to live a life serving the Lord, looking forward to the day when he will hear the words “Well done, thou good and faithful servant!”.

One of the key points was that men are good at keeping secrets; we hide our limitations so people won’t notice.  Sometimes we use our limitations as excuses.
Wayne encouraged us with a verse from the Bible – John 15:5 “I am the vine; you are the branches.  If you remain in me and I in you, you will bear much fruit; apart from me you can do nothing.”  God can use us through our limitations!

He finished with an emphasis on having Christian brothers in your life … “Find someone to tell what’s going on in your life.”  Wise words.

It was another well-attended gathering with 40 men enjoying a steak … and with no COVID restrictions!

Troy Scarrow was the evening’s speaker and he entertained us with numerous tales of his international travels.  He provided stories of how God travels with him to both protect him and keep his sense of humour alive!

Thank you Troy, for telling us about your journey.

We had tasty meal at the Blackfoot Inn.  It was well-attended; about 32 men came (in spite of the cold weather!).

We enjoyed a steak dinner & then Myles Hamilton had an inspirational message for us.

Myles talked about three things:  his own journey, finishing well and reflecting on his father’s story.

Myles grew up in Airdrie in the 60’s.  Myles, his parents and 6 siblings would walk to the United Church in town.  He went to Sunday School when he was younger, but the Prairie Bible Camp had a greater influence on his life.  After many adventures in his teen years, he rededicated his life to Christ at a Billy Graham crusade in 1981.

While attending SAIT he met his lovely wife Corrine who invited him to Centre Street Church where they were married by Henry Schorr.

Now at the age of 60, Myles talked about finishing well (and what better incentive can we have than to please God?) as we all must stand before the Seat of Judgement at the end of our life.
Myles talked about the three things that are important to finishing well:
Are you right with the Lord?
Are you right with your family?
Do you still have the ability to have impact?

In closing, he talked about the lessons he learned from observing his own father’s journey through life. Hugh Hamilton moved to Airdrie and bought a small golf course.He also purchased property around the outskirts of Airdrie in addition to opening the Airdrie Registry.After the financial crash, when interest rates went to unprecedented levels which may parallel our current situation (coincidentally also under a Trudeau government), Hugh had to start over again at the age of 60.Hugh Hamilton was deeply humbled by this and Myles recalled him often saying “You will always have trouble, it’s how you deal with it that is the most important thing to remember”.

Hugh was right with the Lord, he was right with his family, and he made an impact on those around him until the end of his life. Hugh was a good example of finishing well.

Thank you, Myles, for sharing.

We had another wonderful evening gathering as a group of men.

We enjoyed our steaks and then our speaker, Ron Buschman, spoke to the group about “Successful Mentoring – Made Easy”.

Many of us feel like we don’t have the time nor the skills to be mentors; Ron shared reflections from his mentoring journey …

God will often intersect our life with another man who is experiencing a life situation that we have already been through.  Take the initiative to want to hear more of their story.  You’ll be amazed at how God directs and supports you both!   Be encouraged that you “have what it takes” to influence and inspire change in other men through “Life-to-Life” relationships.

We had a fantastic night, both on the course and during the fellowship afterwards.
Heritage Pointe was in great shape and the weather was great!
“The Hucksters” took home the trophy with a 5-under par score.

We enjoyed a roast beef dinner & then Morris Lukowich gave a great talk on his faith walk as a professional hockey player. 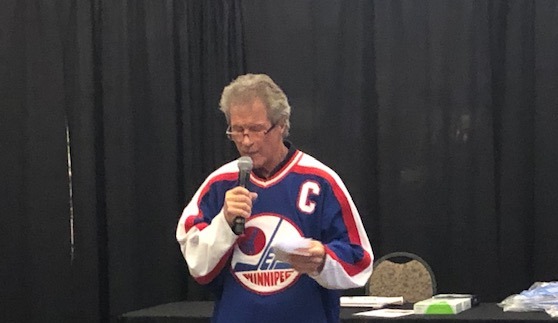 His childhood prayer was to play hockey with his heroes: Gordie Howe and Bobby Hull.

God honoured his prayer as he ended up playing with each one while at the Houston Aeros and the Winnipeg Jets.

Morris shared stories about his interactions with the many greats he was fortunate enough to play with during his career, including how Gordie Howe was not the cleanest of players on the ice, especially when his sons were the recipients of some unjust play.  One of his fondest memories was when Gordie Howe wiped his sweaty forehead on Morris’ shoulder pad while sitting on the bench … he felt that he had “made the big times.”
Morris believes he had his Christian conversion experience at the Saddledome, not playing hockey, but at the 1999 Franklin Graham Festival. He was baptized shortly thereafter in the Kananaskis River in the Rocky Mountains.

Morris answered a few questions from the group and was quite honest about his shortcomings regarding the temptations of being in the professional hockey world.

We wrapped up the evening with the guys having the chance to get a signed photo and have their photo taken with Morris while wearing one of his jerseys!

The Hucksters (Myke Thomas, Don Dutton, Joe Wensink, Ed Huculak) are the new champs! They finished at 5-under par for the day!

Swing and a Prayer

Morris on the tee!

Up & down from the weeds

Keep an eye on it fellas!

The weather was perfect as over 60 men got together at Heritage Pointe for an evening of great roast beef, lots of conversation and a very inspiring message from Dr. Phil Nordin.  Phil talked about the importance of using the correct words in how we express ourselves: Maybe, Might, Should, Could, Would and Must. These words can often lead us to a sense of defeat and demoralization when we use them in the language of failure.  Phil went on to say that he came to realize that the power source of unworthiness is past failures, “if only’s” and “should haves”.

This leads us to the question:  How do we get beyond the self-deprecation that comes from past failures?

There are two changes you can make:

2) Learn to redirect your focus:

A great message to leave with the men.

The Ryder Cupsters (Cole Hartung, Garth Hartung, Myles Hamilton and Don Poffenroth) are the new champs! They led a hard fought battle with many other teams hot on their heals.  Coming in @ -8 under par, they nudged past the Duffers who finished up @ -7, while a few other teams finished up @-6. This is the Cupsters fourth victory in the last five years.  Well Done!

Soaked to the bone

Despite the drenching rain, four groups managed to finish the course without a dry piece of clothing.  ( “Soaked to the bone “! was one comment ) But that didn’t dampen the evening as over 60 men shared an excellent roast beef dinner and listened to an insightful talk by Pastor Warren Wiebe.

The early period in life is like being on the tee box;  the fairway is long and wide.  There are lots of choices.  The consequences of a bad drive or poor decision are usually not too bad.

Your second shot / approach shot is similar to middle age.  You must be more accurate and the consequences of a poor decision (in life) can have more severe consequences.   You could end up in the water, a sand trap or thick rough around the green.   In mid-life, a poor decision could bring you financial ruin, a divorce or poor health.

When you’re on the green and putting is like your finishing/golden years on earth.   You need to be very focused on the goal (for a believer in Christ — eternal life).  You must be accurate, in direction and effort, to sink your putt and you must keep your eyes and mind focused on Heaven and Jesus as we draw close to the finish of our lives.

The Eagle Has Landed

Carter Lautner and Paul Erickson, a new 2-man entry (not planned … we blew it) came in with a final score of -4. Congratulations Carter and Paul!

Over the Hill Gang

Congratulations to the three time champions! In the final moments, the Sub-Pars (Ron Bushman, Greg Kist, Rodd Sawatsky and Reggie Bengleton) were leading the field at -8 when on the last hole the Ryder Cupsters pulled off a 40 ft eagle putt (Myles Hamilton) to force a putt-off.  Donn Poffenroth sank a putt on his first attempt to give the Ryder Cupsters their third championship in a row!  The Ryder Cupsters each received an 18 hole round of golf (compliments of Silver Wing) and have their name on the coveted MANtheGAP trophy!

Due to Government of Alberta public health restrictions on public gatherings, we are postponing events in which we cannot abide by restrictions.  Check back here for updates.